Open and Affirming may expand in Alamance County 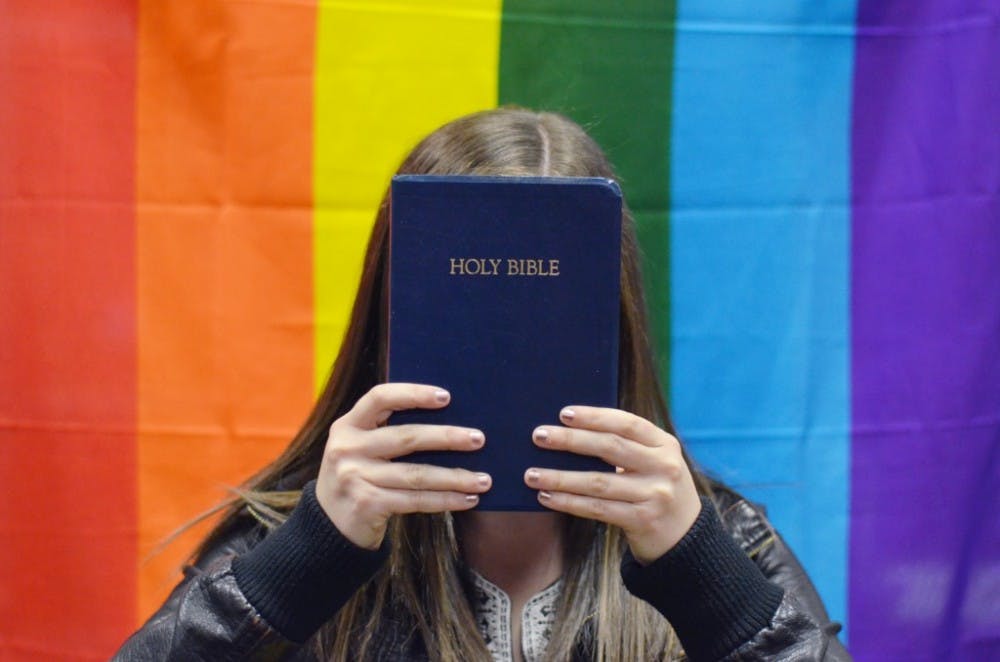 People poured into the office of the Rev. Phil Hardy, pastor at Life’s Journey United Church of Christ in Burlington. It was Spring 2012, and Amendment One, which made it illegal for North Carolina to recognize same-sex marriage, had just passed.

But Hardy and his church refused to buy into the contempt. As an Open and Affirming congregation, Life’s Journey decided the church would openly include LGBTQIA people in the assembly’s life and ministry.

“One of the things the passing of Amendment One did was spike the angry, condemning religious rhetoric,” Hardy said. “During those times, people sitting in my office — how profoundly thankful they were to hear a different kind of rhetoric. The power with the church is not that people don’t hear us, but that people do hear us.”

Open and Affirming is an official designation for congregations within the United Church of Christ and means that a church fully accepts LGBTQIA people within its ministry.

The United Church of Christ is a Protestant sect of Christianity, with about 1.1 million members filling 5,100 churches across the United States.

Life’s Journey is one of 20 Open and Affirming churches in North Carolina and the only one in Alamance County.

But another church, right in Elon University’s backyard, may soon join it.

In a few months, Elon Community Church (ECC) will be taking a vote on whether to become Open and Affirming. The church is currently in discernment — a time period for obtaining spiritual direction and understanding without making judgment — until an outcome is decided in January.

The process began last September to determine if the church will label itself Open and Affirming.

“When Amendment One came out we had a forum at the church,” said the Rev. Randy Orwig, senior pastor at ECC. “We try to accept all sides of an argument. That’s how we’re presenting Open and Affirming.”

ECC organized a survey on its website’s home page for congregation members to voice their feelings on becoming Open and Affirming. With 67 responses in — about 25 percent of the church membership — 57 were in favor of adding the Open and Affirming label, eight were against and three had no opinion.

Additionally, the church held meetings to discuss the status and will continue to do so until the vote Jan. 18.

Robert Martin has been a member of ECC since July and is on the Open and Affirming task force, which was formed to organize events and logistics as the vote draws nearer. He said he felt drawn to ECC for taking a stand for love and graciousness.

“Being Open and Affirming is holding up a banner that says that love can be given freely,” he said. “You can love everybody, and why shouldn’t we? It’s what Christ wanted.”

While Orwig said there is a favorable contingency at the church who want it to become Open and Affirming, there is still some silence from those on the other side.

“I don’t know if I’m surprised or concerned because I care about those people even if they feel like they can’t vote for this,” he said. “I want them to know they’re still loved. We’re trying to create this to be a win-win situation.”

Martin said he is pleased with the dialogue in the church so far.

“There are folks in the church who are very traditional [and] who think we are turning our back on the Bible,” he said. “What the church is up to is trying to figure out how the idea of being Open and Affirming can coordinate with those beliefs.”

While ECC weighs the decision five miles away, Life’s Journey is in its fourth year as an Open and Affirming church.

The church is a product of a merger of two Burlington churches: Grace United Church of Christ and St. John’s New Mission. When the two congregations combined in 2011, it was decided the new establishment would register as Open and Affirming from inception.

Hardy, who was pastor at Grace United and oversaw the merger, said the decision to become Open provided a new resource to the county.

“Alamance County is by and large a conservative political environment,” Hardy said. “If people have lived in environments in which struggling to find a safe place is a challenge, there is a need for a church like ours.”

Since Life’s Journey was founded, growth of the church’s LGBTQIA population has increased, but the overall membership isn’t much bigger than Grace United was before the merger, as some members left following the decision to become Open.

“A merger is difficult under any circumstances,” Hardy said. “Some people have not wanted to engage that struggle. For some, living life in an Open and Affirming environment proved to be more challenging.”

Noah Read, a Burlington resident, appreciates the challenge. He joined Life’s Journey six months ago but has been attending the services for about a year. Read, who is heterosexual, said it’s important for his children to grow up in a diverse environment and said the growing LGBTQIA population gives them that exposure to diversity.

“It is the sort of thing you don’t want to just talk about, but want to live,” he said. “It’s welcoming not just to the LGBT community, but everyone. There’s economic and racial diversity.”

And ECC is looking to bring that element of diversity to its assembly with the Jan. 18 vote.

“I consider this vote is going to be a holy moment,” Orwig said. “It’s not about winning and losing. It’s about people following a path where they can say something important. I want them to see it’s a spiritual decision.”

Coming out in North Carolina

Elon University junior Leslie Wiley* wasn’t worried about God. She knew he would accept her for being a lesbian. Growing up in North Carolina, she said people who used God’s name to evoke discrimination often disheartened her.

“‘Love the sinner, hate the sin,’” she said. “I get the intention of the phrase, but it’s really hurtful. It’s like saying to a child, ‘I love you so much, but who you are is an abomination.’”

Matthew Antonio Bosch, director of Elon’s Gender and LGBTQIA Center, said when students like Wiley come to him for confidential conversations, they are often there to discuss the intersection of religion and sexuality.

According to Bosch, there are often two factors in place: First, an “I’m the only” syndrome, meaning students often don’t know anybody else who is devoutly religious and identifies as LGBTQIA, and second, the community response.

“There’s a very serious groupthink that if their church community knew, that they would be afraid for safety or impact their standing here at Elon,” Bosch said.

But in North Carolina, major steps have been made in the fight toward equality. On Oct. 10, a U.S. District Judge ruled the state’s denial of marriage rights to gay couples unconstitutional, a decision that surprised Wiley.

The ruling came following an April lawsuit filed by the United Church of Christ and after a coalition of Baptists, Lutherans and Unitarian Universalists argued that stating a marriage can only be between a man and woman is a crime.

“I thought it was going to take another five years,” she said. “The people of faith have been one of the groups to challenge it, and that’s really cool.”

Even though the state has legalized gay marriage, churches don’t necessarily have to perform them.

Bosch said in an ideal world, it would be necessary for churches to accept people on the LGBTQIA spectrum, but it would create problems now.

“That could mean destructive things from the congregation when a sweeping change is made,” he said. “It can really feel like we need to have a huge backlash or an upheaval of a system, because people will feel like someone is messing with their god. That can solidify their deeply held aversions.”

The nation has seen steady growth of Open and Affirming congregations since the movement began.

In 1983, the United Church of Christ Coalition for LGBT Concerns, an independent organization providing support for LGBTQIA people, proposed a covenant to the General Senate calling for an endorsement of a program that encouraged congregations to Open and Affirm. It did not pass.

Two years later, the same covenant reopened on the floor and was adopted.

Since 1985, 1,217 churches — 23 percent of congregations — across the country have become Open and Affirming. Andy Lang, executive director of the Open and Affirming Coalition, formerly known as the Coalition for LGBT Concerns, said the rate of growth seems to be speeding up.

“We continue to improve our ability to reach out and support churches, but society is changing so rapidly,” he said. “Members of churches are realizing we need to be ready for married couples and host same-sex weddings.”

With about 25 percent membership attending Open and Affirming churches, it makes the United Church of Christ the largest LGBTQIA-affirming movement in the world. Much of that development can be attributed to the growing acceptance of gay rights.

Since the June 2013 U.S. Supreme Court case United States v. Windsor, in which the U.S. Supreme Court struck down a law barring gay marriage, five states ruled that same-sex marriage violates the Constitution. Despite the progress, Lang added there is still a lot of work ahead.

“For every one LGBTQ church and synagogue, there are at least a thousand congregations that are not able to welcome their LGBT neighbors,” he said. “We know we’re a small subset of American religion.”

Though the United Church of Christ’s seminaries, regional bodies and offices are all on board with being Open and Affirming, it is up to individual congregations to choose whether they adopt the covenant.

“Everybody in the congregation is treated with respect — everybody is safe,” Lang said. “This is tremendously important because our goal is not to divide churches against themselves. Our goal is to unify churches.”

There may still be a long way to go for the coalition, but Wiley said the progress on both the religious and governmental fronts have warmed her heart.

Note: An * denotes a name change to the request of anonymity.