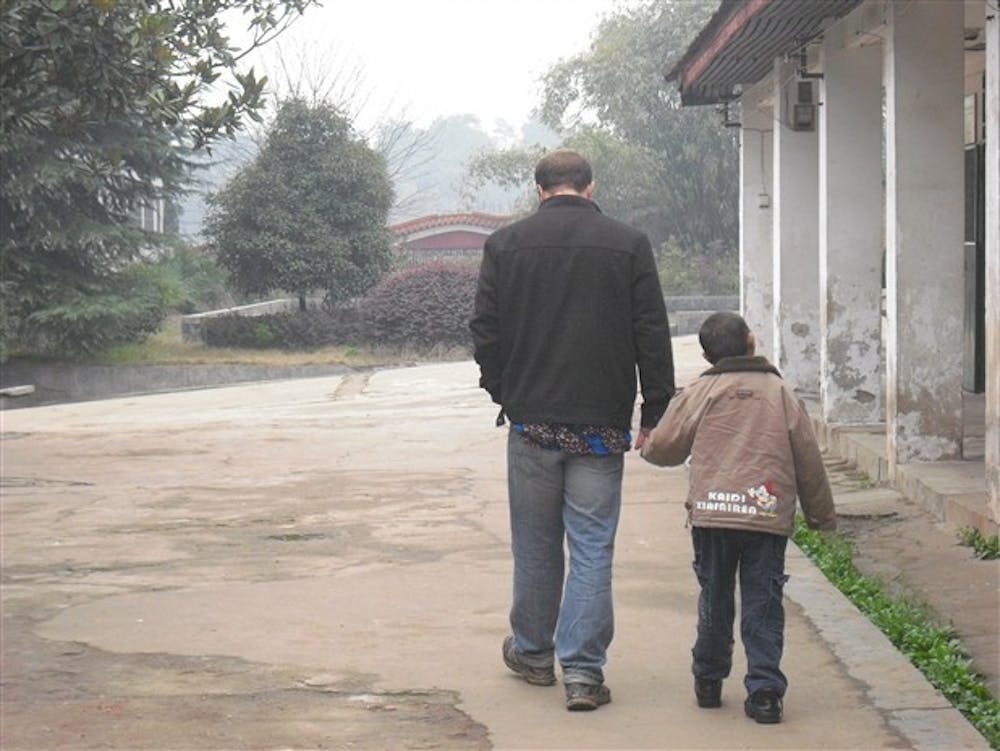 Johnson's journal will chronicle his experience with his father's terminal illness, as well as the service he did abroad, where he met many children in need. Photo submitted by Kyle Johnson,

Elon University alumnus Kyle Johnson, Class of 2010, hopes to take readers to the depths of despair and the heights of hope with a book detailing the last months he spent with his father and his yearlong journey of remembrance.

The book, stemming from Johnson’s personal journal, chronicles how he dealt with his father’s diagnosis of terminal cancer, including joining his father in marking items off his bucket list. It continues through Johnson’s experiences in the World Race, an 11-month Christian mission program that allows participants to travel around the globe to 11 countries, participating in service work along the way.

Johnson studied strategic communications at the university and said although he never considered himself a writer, he picked up the skills of brevity and clarity as a student.

“Something compelled me to start writing,” he said. “I felt like I was going through something that nobody would understand. I felt like I just immediately had a story to tell. It was really difficult, not considering myself a writer.”

Not knowing what a journal should look like, Johnson said he began by telling the story as it progressed, not sticking to any particular daily schedule — just writing every few days. Raw, brutal honesty is perhaps the best characterization of the words within Johnson’s journal and information was only removed if he felt it could potentially damage someone else.

When he first began writing, Johnson said his aim for the journal was to create more of a written record to pass down to his kids so they could learn about their grandfather. As the story progressed and Johnson participated in crazy activities with his dad, he began to ponder the possibility of sharing it with others.

But it was not until he realized the strength of his personal testimony that he began to seriously consider publishing the journal.

“I was rescued by God through my dad’s tragedy,” he said. “Cancer touches everybody and it affects everybody in some way or another. And, though everyone responds differently and every case is different, it’s a terrible thing.”

Johnson was encouraged by a literary agent to self-publish the journal. As of now, he said he is waiting for the market for personal stories to come back around. He is considering eventually publishing a series of books about dealing with his father’s cancer and participating in the World Race.

As much as the journey was a way to honor his father, it was also a time for personal revelation for Johnson, who said he was forced to reevaluate what it meant to practice Christianity.

“What I recognized was there was a lot that was holding me back from being a practicing Christian when my dad first got sick, I had all these misconceptions,” he said. “I (didn’t) want to become a good Christian man while I had all my youth to waste.”

But what Johnson said he realized, particularly during his trip with the World Race, was the opportunity to practice what he had always said he believed.

“The trip was to honor him, but it’s also my first step in following what I believe,” Johnson said in a previous interview. “I lived so long believing, but you’d never know it based on how I lived. I’ve got the rest of my life to honor my dad but first by honoring God the way my father taught me.”

He said he hopes the journal also serves as a reminder of the benefits of following God.

“That’s something I really hope people would see,” Johnson said. “A life following God is always going to be more fulfilling.”